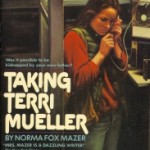 Those who know me well know that I cringe whenever someone uses the nouns “boy” and “girl” as adjectives, whether it’s to describe a color (Since when did rays of reflected light belong to a particular gender?), a book, or anything else. That being said, some authors tend to write for and/or attract a narrow audience. Norma Fox Mazer is one such author.

Now, I must confess that when I picked up Norma Fox Mazer’s Taking Terri Mueller, I had convinced myself that I was going to “take one for the team” (The “team,” of course, is a legion of former and future students.) and read a “girl book.” Having finished the book, I no longer have visions of martyrdom.

When asked why she wrote Taking Terri Mueller, Ms. Mazer replied, “I read that there are an estimated 25,000 children stolen each year in the aftermath of divorce and that most of them will never see their mothers again. I was not only saddened by this bleak statistic, I was also startled and fascinated that in the name of love adults would deprive their children not only of a parent but of family and friends, community and stability. I wrote this book for both adults and children. First, because it’s a story I think everyone can connect to; and second–as in all my writing for young people–to say, ‘Okay, life is not easy, but don’t despair. There is strength inside you.’ ”