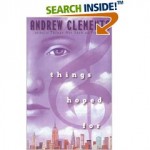 Andrew Clements’ Things Hoped For is easily one of the best books I have ever read. And that’s not hyperbole. In fact, I’m not sure I’m capable of writing a review that will do this book justice. Instead, I think I’ll share the text from the back cover:

Gwen’s grandfather has disappeared from their home in New York City, but he’s left her a phone message telling her not to worry–and to let no one know he’s gone. The timing couldn’t be worse. Gwen has violin auditions soon at Manhattan’s top music schools. More stress is not what she needs. The she meets Robert, also in town for auditions, and her new freedom actually seems to have some benefits. After all, she’s seventeen, suddenly on her own, and there’s no place on earth quite like New York.

But below the surface, other forces are in motion. There’s the great-uncle who keeps coming to the house, insisting he has to talk with her grandfather. There’s the strange man Gwen sees one day when shopping, and then there’s the discovery, right in her own home, that brings the NYPD crashing onto the scene, uniting Gwen and Robert in ways neither of them could have foretold.

In this remarkable follow-up to the wildly popular Things Not Seen, award-winning author Andrew Clements brings readers a multi-layered story about art and identity, about friendship and family, and ultimately, about life and love.