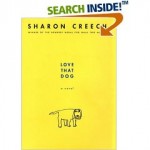 Although Love That Dog is written in free verse, it’s almost a dialogue (a la Beverly Cleary’s Dear Mr. Henshaw) between Jack and his teacher, Miss Stretchberry, though the reader must infer Miss Stretchberry’s thoughts based on Jack’s poems. (If you’ve ever listened to one end of a phone conversation and been able to figure out what the person on the other end was saying, you shouldn’t have any trouble following this novel’s plot.) Despite his preconceived notion that “boys don’t write poetry / Girls do”, over the course of one school year, Jack learns that boys do indeed write poetry–and that they can be very good at it. Through poetry, Jack finds his voice, a voice he uses to share his thoughts about life, love (between father and son and of the a-boy-and-his-dog variety), and loss.